Print out a text for real democracy and on 5th of November 2012, show it visibly wherever you are. (more info)

Remember, remember the Fifth of November. Also in 2012! 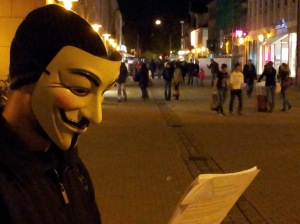 Print out a text for real democracy. And on Monday, November 5, 2012, show it visibly wherever you are.

Countdown: The fifth of November 2011

Only a couple of hours left till the fifth of November 2011, the first #PowerOfWordsDay.
Please think about these two things for tomorrow:

In addition, for all people living near Erlangen, Germany:
The local Real Democracy Now / Occupy group in Erlangen, Germany, who have voted in their weekly assembly to take part in our event here and to support it, have asked us to inform everybody where and when they implement this event on #nov5 locally in Erlangen:
Fifth of November, 16-18 o’clock (4pm-6pm), Hugenottenplatz, Erlangen, Germany. Details in this posting on their homepage.

The power of words. The power of symbols. The power of the people.
Because while the truncheon may be used in lieu of conversation, words will always retain their power.
Real democracy now.